AdNauseam 3.0: fighting back against online surveillance

New York, Nov 1st, 2016 — AdNauseam, the ad blocker that clicks on every ad in an effort to end commercial web tracking, is now compatible with Chrome, Firefox and Opera browsers. The new 3.0 version provides a faster, more efficient system that is uniquely built to hide ads, protect users, and allow them to collectively fight back against online advertising surveillance.

Initiated by artist/programmer Daniel C. Howe and privacy expert Helen Nissenbaum, this free browser extension hides ads while also quietly clicking each one, polluting users’ data profiles with fake visits that renders tracking attempts futile. AdNauseam, developed and designed by Howe and designer/media activist Mushon Zer-Aviv, extends the open-source uBlock technology to create a tool for both protection and protest, actively disrupting the economics of advertising networks by spreading mistrust between the advertisers and the networks that charge them for clicks.

Market research shows nearly 70 million people in the US alone will choose to block ads this year, with a growing number attributing this decision to privacy concerns. Howe says: “While ad blocker adoption continues to grow, surveillance ad networks have doubled-down on their technology, inventing ever more devious ways of ignoring users’ privacy. We built AdNauseam because we are tired of hiding; instead we say, ‘you want our data? Come and get it... and will give you something extra too.’ The response we got for our initial Firefox versions made it clear that ignoring ads is no longer enough; people also want to fight back.”

Zer-Aviv continues: “This motivated us to come up with version 3.0 that not only supports more browsers, but also estimates how much advertising money was potentially spent on your decoy clicks. Just a few days of browsing on a single AdNauseam-enabled browser can quickly amount to hundred of dollars in advertising fees payed to the sites you browse…”

When users install AdNauseam 3.0, they must choose to explicitly enable any of its three core functionalities: hiding ads, clicking ads and blocking malicious trackers. And while AdNauseam does more than your average ad blocker, it still excels in performance benchmarks, loading pages faster than the leading ad blocker, AdBlock Plus, and nearly twice as fast as with no ad blocker installed. After more than two years of development this new official release is packed with features, including an “Ad Vault” that lets you interactively explore the ads you’ve been served and inspect them one-by-one, a Pay-Per-Click cost analysis, support for the EFF’s DNT inititative, an import/export interface for your data and, most importantly, no tracking whatsoever on our part.

While recent media attention has focused on surveillance by government agencies, the project’s creators see more worrying long-term repercussions from tracking done by corporations. Once personal data has been collected, they argue, it can be aggregated, sold, or stolen, and used for purposes far from the original intent (discrimination, identity theft, persecution, etc.) But Nissenbaum argues that the project is not anti-advertising: “There’s an emerging movement in the online ad industry to use sites that don’t track you. We collaborated with our friends at the Electronic Frontier Foundation to make exceptions for ads on these sites. So in the rare event you see an ad while using AdNauseam, cherish it as it is probably being served by one of the good guys.”

This is not the first collaboration between Howe and Nissenbaum. In 2006 they released TrackMeNot, a browser extension that continuously searches decoy subjects in order to hide your genuine search queries in a cloud of noise. They call this tactic obfuscation and define it as the “communication of misleading, ambiguous, or false data in an effort to evade, distract, or confuse data gatherers...” Inspired by AdNauseam and TrackMeNot, Nissenbaum also co-authored a book with Finn Brunton titled Obfuscation—A User’s Guide for Privacy and Protest.

As of December 31st, 2016 AdNauseam was still available for Chrome at the Google Web Store, but was recently banned from the store by Google without detailed explanation. The project creators say they are not surprised (or deterred) by Google for attempting to act against AdNauseam in this way. They have since issued a response to Google’s Chrome Store takedown.

“As long as ad networks keep sabotaging any initiative respectful of data privacy,” Zer-Aviv says, “AdNauseam will keep on pushing their buttons — all of them!” 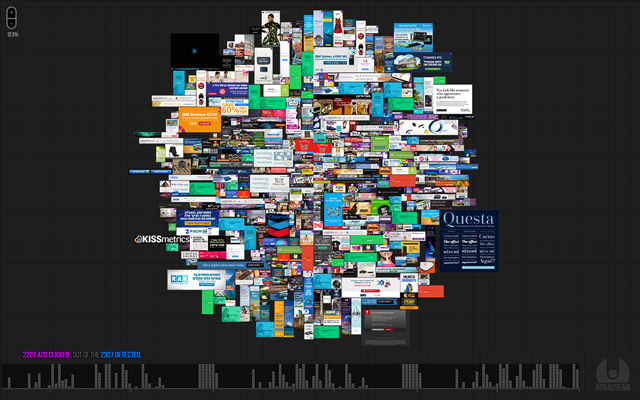